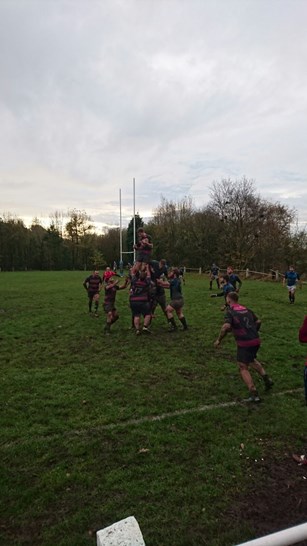 With the sun shining brightly and a gentle breeze floating in off the ocean, oh sorry I was thinking about Tenerife again.

Ramsay arrived on an unusually sunny day in November complaining how cold it was. Good job they didn't come on a real Aspull day.

A late late late cry off by Robl who had suffered a career threatening broken finger nail whilst his injury was not life threatening it had ruined his French manicure.

It was the usual build up. Fred had only brought 1 sock and asked had anyone got a spare "I have which foot is it Fred Left or right?” After pondering for a few moments then looking across to his dad he smiled and said are you joking?

Aidan was once again Poorly "Baz have you any Immodium " a swift reply of "I’m not a F***ing Chemist, I only have limited supply of drugs Paracetamol, Ibruprofen and Gaviscon"

Despite missing the experience and power of Jake, Aspull were confident they could cope.

Allan returned to bolster the pack, fully recovered after being rescued when he was washed upon the beach in Cornwall.

Webby had decided to have a tattoo before the game. He said it was no different to any other Saturday as he is use to loads of Pricks on a match day.

Aspull made it 9 from 9 in the league as they once again completely dominated their opponents Ramsay from the Isle of Man who came on the back of some good wins which had seen them climb to 2nd in the league behind Aspull, but they were no match for the Aspull pack, once again led my number 8 Liam West with fellow back rowers Nathan Bennett and Andrew Seddon completely dominating their opponents. Bennett was outstanding in defence and fielding the kick offs whilst West and Seddon made several telling breaks to set up tries. Liam West also finished with a well-deserved hat trick.

From the kick off Aspull were in a determined mood and it took less than 5 mins for them to take the lead. Full back Kieran Ford put in an excellent 50 metre kick to the corner Aspull regained the ball and from a driving maul Andrew Seddon crossed to give the home side the lead 5-0.

The next score came from a break by winger Joe Roper who broke the line and passed on to Kieran Ford to finish off the try 10-0.

Ramsay had a 10 min spell with pressure on the Aspull line but once again the home defence stood firm; and a long kick up field again by Ford set up field position and the forwards created the space for west to score his 1st try 15-0.

Scrum half Alex Kindred continually pinned back Ramsay with some excellent box kicking more pressure from Aspull resulted in stand off and captain Sam Kindred scoring converted by Ford 22-0. The forwards once again set up good field position and young winger Fred Owen, who was having an excellent game in both attack and defence, was rewarded with a try. Taking 3 men over the line with him 27-0 HT.

Aspull started the 2nd half as they finished the 1st a break by full back Kieran Ford led to another try by Liam West ford converted 34-0.

Ramsay had come full of confidence but had been blown away by Aspull’s pace and power. They did show in the 2nd half that they are a good side and played some good rugby pressing the Aspull line and were eventually rewarded with a penalty try 34-7. Ramsay were, to their credit, trying to play open rugby but it cost them when centre Johny Linekar intercepted to run 50metres to score under the post 39-7.

Nathan Bennett was having an excellent game in the loose and was rewarded when a break by Sam Kindred saw him finish off with a try under the post converted by ford 46-7.

Ramsay never gave up and scored a further try when some uncharacteristic poor tackling by the Aspull backs allowed them to score 46-14 with the clock running down there was just enough time for West to complete his hat trick, converted by Ford to give Aspull an impressive 53-14 victory against a team who will be pushing for promotion themselves at the end of the season.

Liam West had an outstanding game along with Seddon and Bennett in the back row but young winger Fred Owen was man of the match.

Once again Sam did his best impression of a speed bump slowing players down but not managing to stop them. It’s a good job younger brother Alex was there to do his tackling for him.

Aidan continued his complaining "I think it was a dodgy Pizza last night " the sympathy from his teammates was overwhelming. Especially when he passed his bug on to half the team. Thanks for sharing Aidan!

Fred had his best game yet for the Emus but he did manage to give a penalty away for being the furthest offside ever from a kick. A good 40m, he said "I ran for ball and I as I went to catch it I thought I can’t do this I’m offside"

Andy Hair was like a kid at Christmas all day "Why you so happy Andy?" “I am going home to watch the BAA BAA'S later I’ve recorded it."

He was so disappointed when he got home sat down with a beer put the TV on, then realised the BAA BAA's was a rugby team and not a flock of WELSH SHEEP!!!

Fred was found guilty of gaining entry to Guinness book of records for being so far off side.

Aidan was found guilty of being a soft arse and always being ill.

Webby was guilty of being late because he was having a tattoo and it wasn't even an EMU!

Robl was guilty of a list of misdemeanours but unfortunately he missed out as he had left early AGAIN. Don't worry fellow Emus, Baz the Judge doesn't forget and just like the Lottery, every time it is not won it rolls over and increases just like EMU Punishments.

Those found guilty were given the Chilli dip. A rather tasty, if somewhat hot, sauce.

Jack and Random were present to see the punishment and like fools said if Fred is doing it we will while we are his mates. Oh dear, what a mistake I think Jack and Random will think twice next time or maybe just get a different friend.

Aspull are to hold and ex-players’ reunion Saturday 17th December all ex-players are welcome to attend.