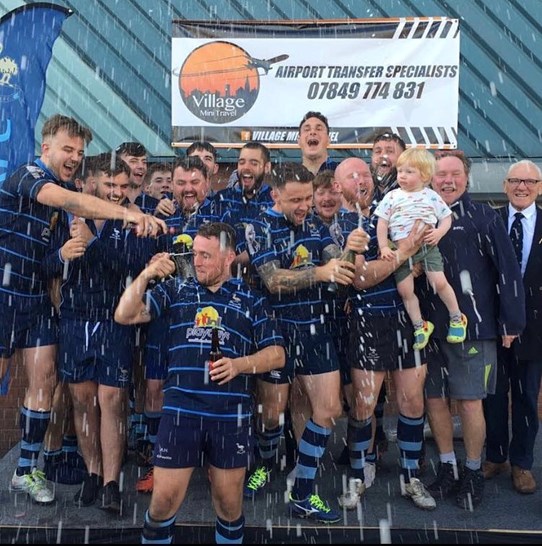 Aspull were crowned South Lancs Cheshire 2 Champions after overcoming a slow start to win convincingly away at Birchfield. The home team started the game well and took Aspull by surprise to score a converted try within 5mins, 7-0. The home team were in determined mood and constantly threatened to increase the lead, but Aspull’s scrambling defence was up to the task, playing on a small narrow pitch Aspull’s backs struggled to create the spaces as the host defended well. After good work by the pack, Aspull found themselves inside the Birchfield 22, from a scrum they broke blind and fullback Rhodri Carlton-Jones forced his way over in the corner, Kieran Fords excellent conversion from the touchline brought the scores level, 7-7. Birchfield’s large pack continued to test the Aspull defence and soon regained the lead when the number 8 scored a converted try, 14-7, and Aspull realised they were in a battle. Aspull had made several changes from last weeks victory over Congleton, some of them positional with next weeks RFU Senior Vase Northern final in mind and it had taken them a while to gel but the ability in the Aspull squad soon showed why they are unbeaten this season when winger Liam Reeve scored in the corner once again converted by Ford right on the stroke of half time, 14-14. Birchfield had contained the Aspull attack well in the 1st half and had been a constant threat in attack.
After the break Aspull soon got into there stride and with 2nd row Pat Wilson breaking through 3 tackles on his way to score from 20m out. Aspull took the lead for the 1st time in the game Ford converted, 14-21. This sparked Aspull into life and they began to find holes in the tiring home defence, captain Sam Kindred playing at stand off was the driving force as they began to take control of the game. Kieran ford broke from inside his own half and found Carlton-Jones in support who raced the 40m to score his 2nd try of the match. Ford converted and aspull were clear 14-28. Ford increased the lead with 2 quick penalties after excellent work at the breakdown by back row Jake Greenhalgh, 14-34. Aspull dominance continued as the home team defence tired, with the forwards now dominating in open play and in the scrums. Sam kindred created space deep inside the Birchfield half and his long pass found Ford who touched down wide out and again converted from the touch line, 14-41. Aspull saved the best try until the end when they ran the ball from inside their 22m area, Ford broke through and outpaced the defence from 80m he converted to give himself a personal tally of 28 points with an 8 from 8 100% kicking record and 2 tries.
A comfortable win in the end but Aspull were tested in the 1st half and whilst not playing to their full potential had far too much for the home side.
This bonus point victory confirmed aspull as Champions of South Lancs Cheshire 2 and they remain unbeaten this season with a league record of played 17 won 17, points for 940, points against 180.
Next week they travel to Northallerton in the rfu senior vase Northern Final and are just 2 games away from Twickenham.
Tweet
Tweets by @aspullrfc