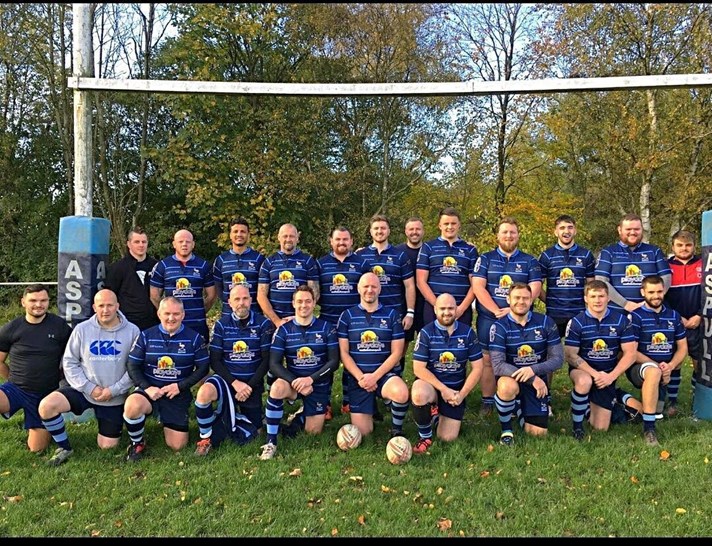 FROM ZERO TO HERO!
Gavin picks his dummy up to win the game and the league for Aspull 2nd XV

With 20 games played and nearly 900 points scored, the whole season came down to this, the penultimate game of the season, Thornton Cleverleys at home. Not only would a win gain us promotion but if results went our way we would emulate our 1st team Emu brothers and be crowned league champions.
So Thornton in true style with no 1st team fixture, played their 1st team who currently lie 3rd in Wigan RUFC league. Thornton also had to win to gain promotion so why wouldnt they???
Aspull had the luxury of naming a very strong side packed with experience and youth. Liam Reeve was back from Barcelona after he had been out there interviewing hookers for next season, so jumped on the subs bench, to bring some flair into the squad.
The 1st half was a very physical encounter with neither defence giving an inch. The referee was whistle happy throughout and gave some equally frustrating decisions for both sides. After the ref had given yet another penalty, captain John "should know better" Gavin kicked the ball in frustration and the ref marched the Aspull lads back 10, putting the Thornton goal kicker in range for the 1st points of the day ( but that wasn't the best goal ).
The game again saw some ferocious defence on both sides and was only lit up by Big Alan making a break in midfield and sprinting 40 yards up the pitch. The poor fullback shut his eyes and held on for dear life, finally bringing the rampaging elephant down 5 yards from the line. Soon after that Thornton were awarded another penalty as one of the Aspull lads looked at the ref the wrong way. However they missed touch and found the gas man Chad Boyce 10 meters in from his own half tight to the touchline. The gas man was about to hand out some bills... he set off on an arcing run across the pitch beating 3 defenders for pace, he then straightened up and beat one defender with power, he then went wider beating another man with pace. He was now right on the opposing touchline 5yrds out with the fullback to beat and you don't stop Stone Cold Chad Boyce from there. Showing his power again he went over in the corner for what was without doubt the try of the season.
Jeff Gavin missed the conversation ( that definatly wasn't the best kick of the day ) .
So half time came and Aspull had the slenderist of leads, 5-3.
Young guns Mike Faz and Ethan Yates have been integral parts of the 2nd team all year and really showed up well yesterday. Mike was pack leader and lead by example tackling everything that moved and hitting every ruck that formed. Big Ethan was at his rampaging best and took on the big Thornton pack time and time again. What bright futures these two have at the club. The club looks in safe hands with such good players coming through and it won't be to long before they are wearing the 1st team jersey. Scrum half Jonny Linekar was having his best game of the season and was controlling the game, whilst Jonty was having his usual all action game.
The second half was alot like the 1st and the game spent long periods of the time in the middle 3rd of the pitch. Aidan Clark took a yellow for giving his opposite number a face massage on the floor, so Aspull really had to respond with some brave tackling on their own line. During this period Thornton got over for their only try of the game which came from a no look eyes closed pass from the centre that somehow landed in the wingers arms. The conversation was missed ( still not the best kick of the day )
Thornton got yet another penalty in the kicking range which their kicker slotted ( and that's still not the best kick of the day )
So we were now 5-11 down...

We had 2 mins on the clock and our pack get a scrum 5 yards out. The pack stayed strong and the ever impressive Jonty picked up at 8 and tipped on to Linekar who in turn found 15 Olly Jump who in turn found Stone cold Chad Boyce for him to score his 2nd try in the corner. The huge crowd went wild... The score was now 11-10 and we had a kick from the sideline to win, not only the game but as the results stood, become league champions. With Liam Reeve on the pitch many thought he may take it. But the many were wrong in a moment which was like an American sports movie. Our regular kicker Jeff "the hammer "Gavin walked over to liam and said…
"this is my kick pal , go tell the lads we've just won the league".
Now this was the best kick of the game, he lined his tee up on the 25 yard line, the crowd went silent, even Withers shut up for 30 seconds. He composed himself, took aim and fired the ball straight between the sticks. What a bloody kick. Aspull 12 - 11 Thornton Cleveleys and the whistle went. What a day to be alive!
Aidan cried, Allan ate, Jonny chatted even more, Scouse smoked, Reevy and Henry pulled... and Captain John Gav had a grin from ear to ear.
Massive games from all the forwards yesterday and I usually give a 1,2,3 man of the match but yesterday I give it to the whole pack as they were brilliant.
One more game left this season in 3 weeks against local rivals Leigh.
And then we have a beer or two to celebrate, who knows?
Tweet
Tweets by @aspullrfc