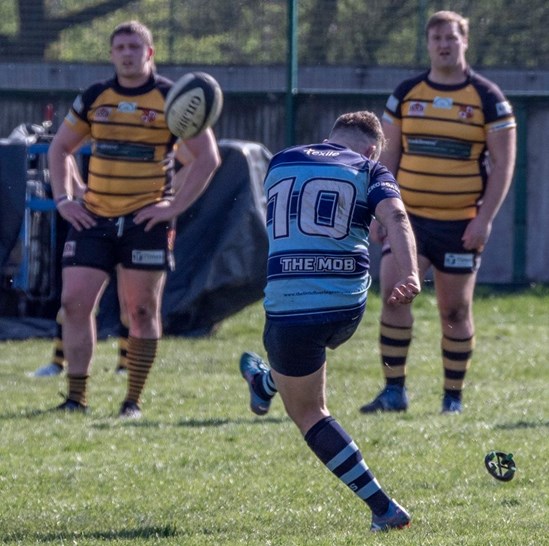 Aspull took on local rivals and promotion hopefuls Orrell in a much anticipated fixture. Aspull took the honours, maintaining their 100% league record and all but ending Orrells promotion chances.
The Aspull defence was excellent throughout, especially the opening exchanges as orrell dominated possession and subjected the Aspull line to a barrage of attack’s but could not break down the visitors defence. Jake Greenhalgh, Tommy Higham and Nathan Bennett, tackling ferociously to keep them out. With limited possession Aspull struggled to get a grip on the game, but when they did have the ball they looked dangerous. A break from full back Rhodri Carlton- Jones saw Aspull awarded a penalty which Liam Reeve slotted, to give aspull the lead after 10mins, 0-3. Aspull increased the lead after a long kick down field by the influential Reeve was followed up and gathered by young winger Henry Ryder, who improves with every game, the ball was recycled and after several forward drives Reeve found Capt Sam Kindred who found a gap in the home defence to score the opening try and increase the lead. Reeve once again was on target with the conversion to give Aspull a 10-0 advantage. Orrell soon hit back when after continued pressure on the Aspull line were awarded a penalty, a quick tap saw them go over in the corner to reduce the deficit 5-10. An excellent Aspull restart by Carlton -Jones saw back row Nathan Bennett win the ball in the air and set up another Aspull attack resulting in another penalty from Reeve 5-13, with half time approaching Orrell reduced the lead with a penalty 8-13.
Orrell started the 2nd half quickly and a try in the corner brought the scores level ,13-13 after 50mins. The game was tight with both sides defences on top, Reeve kicked another penalty to regain the lead for Aspull, 13-16 and they never looked liked losing once they had taken the lead. The forwards were making good yards and the backs were looking dangerous when they had the ball. After good work by the pack set up field position, Reeve switched the ball inside to centre Kieran Ford who ran a superb angle and senses off the would be tacklers to score the match clinching try. Reeve converted to give Aspull a 10 point lead going into the last quarter.
Reeve who had been outstanding all day with his game management and ball distribution sealed the win with a long range penalty 13-26.
An entertaining local derby with plenty for the large crowd to cheer, Aspulll deserves the win , the back row of Nathan Bennett , Liam West and Jake Greenhalgh were outstanding in defence. Sam Kindred was a constant threat in attack with his strong runs, Liam Reeve orchestrates the victory to maintain Aspulls unbeaten run 19 from 19 and with bottom side Oswestry the visitors next week for the final league game of the season. It would be a brave man to bet against them going undefeated for the season.
Tweet
Tweets by @aspullrfc