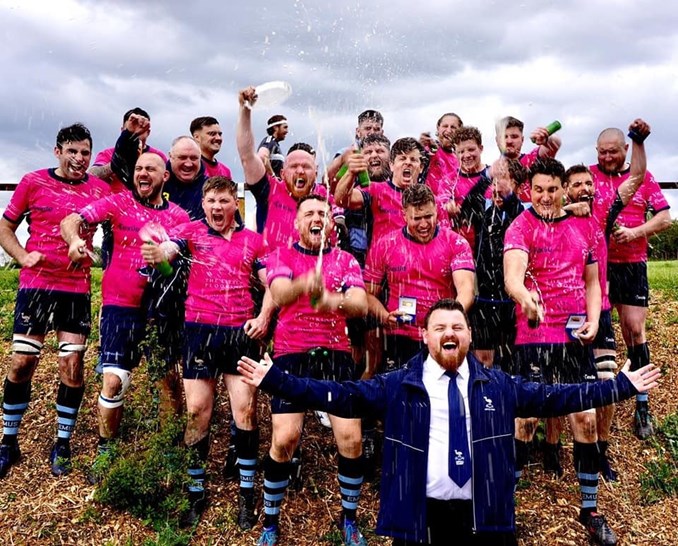 Aspull added the Lancashire plate to the south Lancs 2 title, add to that the 2nd team winning the NOWIRUL Div 4 North league and it has been a very successful season down at Woodshaw park.
Having already played and beaten Eccles twice this season Aspull were in confident mood going into the final, despite Eccles bringing in 4 players from Sedgley Park and Rossendale 1st teams to bolster their team. They were still no match for Aspull who showed why they had gone undefeated in the league all season.

The early stages of the game were close with defences on top, the Aspull defence was once again key to the victory withholding the onslaughts from a much larger Eccles pack from close range on many occasions throughout the game.
Eccles took the lead with a try in the corner after a line out inside the Aspull 22, 0-5 after 15mins. It didn’t take long for Aspull to reply with one of their best team tries of the season, a break by the outstanding Liam Reeve, who’s game management and kicking was key to the victory. The ball was recycled inside the Eccles half, Aspull’s ball control was excellent as they went through 10 phases before Reeve stepped inside, went through the gap and fed Kieran Ford who raced over under the post, Reeve converted to give Aspull the lead 7-5. Reeve followed this up with a well struck penalty 10-5 after 22mins.
Aspull were dominating possession and field position but could not break through the Eccles defence, Aspull lost the ball inside the Eccles 22 and were punished when the stand off (on loan from Sedgley Park for the day ran 80m to score and converted to give Eccles the lead 10-12.
Straight from the kick off Aspull were awarded a penalty at the breakdown thanks to Jake Greenhalgh who had an outstanding game, Reeve was on target to regain the lead 13-12. Aspull almost increased the lead when a 40m break from hooker Tommy Higham found Kieran Ford in support but Ford was tackled short of the line.
HT 13-12
The large Eccles pack were tiring and Aspull took full advantage, upping the pace of the game. The Aspull backs, led by captain Sam Kindred, were in great form in both defence and attack. 2 quick penalties by Reeve, the 2nd after another break by Higham increased the lead just after the break 19-12. Aspull’s next try was a perfectly worked moved, long throw the back of the line, hooker Higham looping around to take the ball, beat the tackler and fed winger Louis Moleyneux who brushed off 2 tacklers to score. Once again Reeve converted to give Aspull Breathing space 26-12. The lead was further increased with a long range Reeve penalty 29-12 after 60mins. Aspull were playing some excellent rugby with the back row of Jake Greenhalgh, Liam West and Nathan Bennett working tirelessly. Eccles did reduce the lead when the standoff intercepted and raced 50m and converted 29-19. Despite Aspull’s dominance the game was not over. Reeves trusty boot once again punished Eccles with another penalty 32-19 and the win was sealed fittingly with a try by Capt. Sam Kindred, who has been the Aspull driving force all season. Moleyneux broke down the wing found Kindred in support, he raced over to complete the win and start some noisy celebrations from the large Aspull crowd, who had travelled to support the team, over 150 supporters made the journey. Reeve converted to take his personal tally to 24 points to add to his excellent game management. Eccles did score a late try when the standoff put in a wide kick for the winger to score, to leave the final score 39-24 to Aspull This was an excellent team performance but the back row of West , Greenhalgh and Bennett were outstanding, along with Sam Kindred and Liam Reeve in the backs.
The victory was a fitting end to a Fantastic season for Aspull RFC; the club has gone from strength to strength over the last few years. It was great to see so many supporters make the journey, including members of the thriving Mini section.