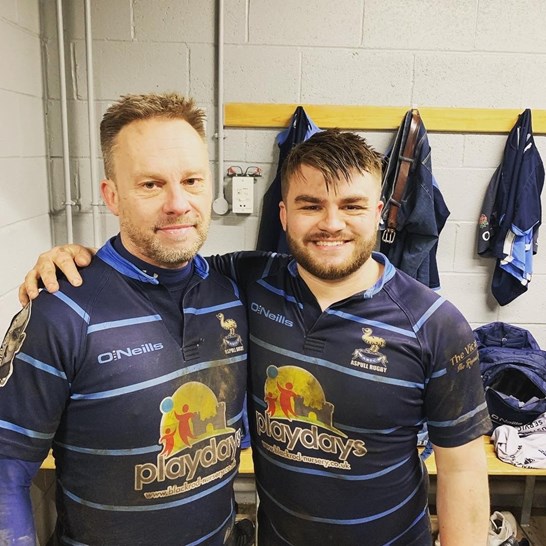 With the last 3 weeks games amassing 248 points for and 12 against, Aspull 2s were hoping for a bit tougher test this week with there big championship decider only 2 weeks away.
Walking onto the pitch we noticed Rochdale's pack were bloody huge, and there inside centre looked like Dwayne the Rock Johnson, much to the amusement of captain John Gav as his brother would be marking him all afternoon.
The game started and Rochdale threw everything at aspull early on. The big pack just kept driving it up. Chris Bennett was back to his best, the wolf showed great aggression against the big Rochdale side tackling everything that moved and winning great ball in the lineout all afternoon.
Pack leader and line out supremo Mike Faz was also in the mood for getting dirty, he tackled everything and backed down to nobody all game.
Aspull managed to absorb the pressure and won turnover ball but a lazy kick from no10 John Gav saw Rochdale charge the ball down and race on to it to knock on over the aspull line. The try was given amazingly as the ref was 40 yards away. Aspull were behind to a converted try and started to play a bit of panic rugby, scoring 2 tries only for the ref to spot 2 forward passes again from roughly 40 yards away. The referees ability to see through rucks, spot things 50 yards away, yet unable to spot Rochdale dangerous play in the line outs pulling our lads down time after time right infront of him was pretty amazing.
Aspull got on the score sheet as 2 quick Rucks and great hands saw Jack and Vera's lad, Matty Duckworth, score the 1st of his 2 tries on debut. Other debutant Jordan Burns showed plenty of gas all day, the young winger who runs a flat 11 seconds for the 100 meters showed great pace and strength. Our other pace man Ian " Scouse " Robertson showed us the art of scrumming along with young Kev Brussells and big Ryan Wignall. They handled the big Rochdale front row perfectly.
Aspulls 2nd try came as the first, 2 quick Rucks and the hands from the backs saw Olly Jump, the fastest fat man in Wigan scamper over from 30 yards out.
With some strong words at half time from the captain, the second half looked alot better.
Martin Jump was having his best game of the season, both he and half back partner John Gav, started to control the game wearing down the big Rochdale pack.
It wasn't long before the tries started to flow. Big Ethan Yates skittled the tiring pack to score two tries taking his tally to 19 for the season. The wolf went over for a well deserved try, after howling at the referee for most of the day for disallowing a previous effort it was just reward for a great game.
Try of the game came after 60 mins when good work from the forwards again saw John drop his older brother Jeffrey David off inside who found Terry Duckworth with a beautiful delayed pass to waltz in under the posts untouched.
Si Lomiko, back from his mid season break travelling South America looked like he never left, making breaks whenever he got the ball and teaming up with Jeff very well in the centres all game.
Big Saggy, Connor James and Ollie Parker played well off the bench. Ollie outpaced Si Lomiko to latch onto a kick Ryan Wignall put in to score under the posts. A great try which Olly deserved after putting monsterous tackles in all game. As for Si Lomiko he has been put on a strict diet as it seems he enjoyed the South American cuisine a bit to much.
Jeff Gavin knocked a few conversations over making the score 39 -7.
Aspull played very well here and showed again that they are the best team in the league.
So no game next week and onto the 23rd when Aspull can clinch promotion with a home game over title rivals Thornton cleveleys. Aspull lost to Thornton in late November so we know there 1st team is going to be very hard to beat... sorry I meant their second team!!!!
Tweet
Tweets by @aspullrfc